Several GTA games have made numerous references to popular movies throughout the series.

Practically every major video game franchise has slipped in a reference or two to some popular movies. It’s nothing new, least of all when the GTA series does the same. However, there’s always an element of surprise when it comes to which movie Rockstar may wish to reference.

Some movie references are common knowledge. Everybody knows about the obvious examples, yet it’s the mix between the well-known movie references and the more obscure ones that intrigue some gamers. Not everybody has watched these movies, so it’s always important to remember that when discussing movie references.

Five instances where the GTA series referenced a popular movie

GTA Vice City is an egregious example of a GTA game that makes references to a movie. Practically every GTA Vice City fan is already aware of this, but it doesn’t make the references any less interesting to know about.

Some obvious examples of GTA Vice City referencing Scarface include:

That’s not all of the examples, either. Needless to say, GTA Vice City pays a lot of homage to Scarface.

The Job is one of the most iconic missions in GTA Vice City. It’s essentially a heist that concludes the entire Malibu Club storyline and makes it the most profitable asset in the entire game. However, it’s not the gameplay that references Friday the 13th Part 3.

Instead, it’s the outfit Tommy and the gang wear. It looks remarkably similar to the one Jason Vorhees wears in the movie, although the pants are touched up to be different.

The movie was released in 1982, and GTA Vice City has plenty of references to movies and TV shows from the 80s.

Terminator 2 was released in 1991, a year before GTA San Andreas took place. In true Rockstar fashion, GTA San Andreas is heavily inspired by some of the most popular movies and TV shows of its era.

In the mission, Just Business, Big Smoke and CJ are chased by a horde of enemies, including one who is in a big truck. In both instances, being in the sewers didn’t help either character get away from the enemies they were trying to evade.

One could argue that Menace II Society is to GTA San Andreas as Scarface is to GTA Vice City. There are numerous references to the film in GTA San Andreas, including the game’s overall gang warfare motif.

There is a GSF member that resembles O-Dog in GTA San Andreas, but that’s not the only reference. The infamous drive-by scene at the end of Menace II Society is similar to the one in The Introduction of GTA San Andreas, with the vehicle even resembling a Sabre.

There’s also a minor reference at the beginning of the game where Ryder tries to rob Well Stacked Pizza, only to be told that the clerk feels sorry for his mother. A similar scene happens in Menace II Society, except it’s less comedic.

GTA San Andreas takes place in 1992, while Menace II Society was released in 1993. 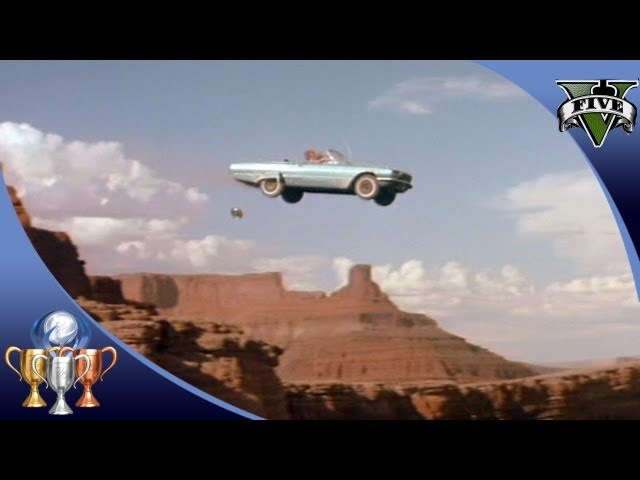 Thelma & Louise is an interesting 1991 flick about two friends that eventually escalates into a female buddy crime movie. The most iconic scene is where the iconic duo is cornered by law enforcement on top of a canyon. Rather than be imprisoned or executed, the two decide to drive forward so that they can die on their own terms.

GTA 5 has a near-identical scene, except it’s just an easy-to-miss Easter egg. The complete Easter egg can be seen in the video above, and it also involves two girls driving to their inevitable doom whilst getting away from law enforcement.

Worry in the position of guarding the temple of Vietnam